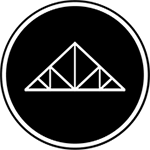 A king stud is a vertical structural element that is placed off layout adjacent to a framed opening on each side, such as a door or window. It is the same length as the common studs in the wall and fastened in a similar manner. A jack stud is typically placed adjacent to the king stud toward the interior of the opening and the two are nailed together along the length of the two studs. The king stud also acts as the terminating point of the header

A framing best practice is to use the straightest studs for king studs to minimize any bowing in the wall as the king stud provides critical support as well as nailing for drywall and casing around the window or door opening. The width of the king stud will match the size of the adjacent studs used for that particular wall and will normally be a stress-rated dimensional lumber.